An overview of the processes that are pertinent to Daedalus Science are shown in the flowchart below. On the top, beyond solar radiation, the main energy sources onto the lower thermosphere are Joule heating, driven by currents, and Energetic Particle Precipitation. Further to the left, together with heating processes and influences from above, variability in the thermosphere-ionosphere is also caused from below by atmospheric waves and tides, together with poorly characterized gravity waves. Thermosphere-Ionosphere variability, caused either by heating processes or dynamics, have a number of profound consequences and impacts down to earth, as shown in the lower layers. These include uncertainties in orbit predictions and resulting constraints in low Earth orbit space operations, as well as radio signal refraction and absorption and resulting navigation and communication signal degradation. Energetic particles from outer space impinging on the atmosphere cause significant chemical changes affecting in particular the odd nitrogen (NOx) cycle, which is critical to Ozone down below, impacting the lower atmosphere in an unknown way. Geomagnetic field variations result in Geomagnetically Induced Currents (GICs), which lead to transformer heating and power transmission fluctuations, and which can result in damages to power grids. In particular, processes that Daedalus will directly observe in-situ are marked in red. 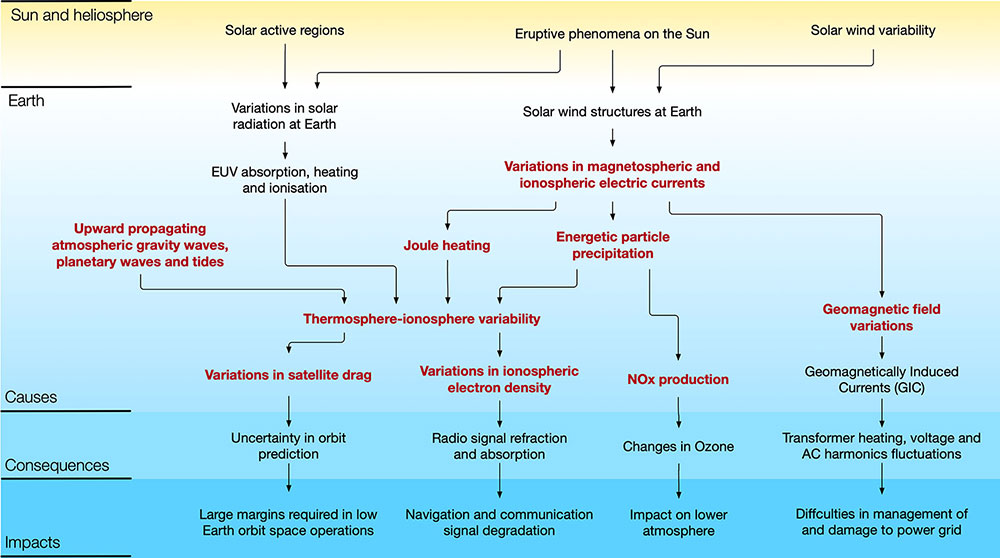 Solar radiation, and in particular the Extreme UltraViolet (EUV) part of the spectrum is the main energy source in the Earth’s upper atmosphere, forming the ionosphere and heating the thermosphere. The transition from the cold Mesosphere to the hot Thermosphere, and the great variations in density, temperature, and the composition within this transition region, means that EUV radiation input will not be the same in all layers. There are currently EUV measurements covering several solar cycles, from spacecraft such as AE, SME, UARS, TIMED and SORCE; with the launch of the Solar Dynamic Observatory, SDO, a continuation of measurements has been provided, with very good temporal resolution of solar inputs into the thermosphere and ionosphere, and has revolutionised our understanding of how the thermosphere and ionosphere respond to solar inputs. EUV spectra has been studied e.g., by Richards et al., 1994 and they found that an average proxy derived from F10.7 can well cover a wide spectrum of behavior in response to EUV. Overall, whereas there are still many open questions, it is considered to be far better studied than other key energy deposition processes, such as local frictional heating or Joule heating and Energetic Particle Precipitation heating, which are the focus of Daedalus, and which rely on in-situ measurements for their characterization.
• Variations in magnetospheric and ionospheric electric currents
• Upward propagating atmospheric gravity waves, planetary waves and tides
• Joule heating is a major heating source in the ionosphere – thermosphere, and a process that is largely coupled to the magnetosphere: Joule heating is caused by collisions between ions and neutrals in the presence of a relative drift between the two (Vasyliūnas, 2005). Joule heating is the result of large-scale, mega-Ampere magnetospheric currents (Field Aligned Currents) that close within the lower thermosphere-ionosphere (Pedersen Currents). A simplified overview schematic is shown in the Figure below. In the Ionosphere-Thermosphere, atmospheric flows consisting of neutral species and charged particles will differ from purely neutral flows because the charged particles are subject to additional electric and magnetic forces. Collisions between atmospheric neutral species and charged particles will yield a momentum exchange term in the momentum equations (ion drag), and an energy conversion term in the thermal energy equation (Joule heating) actualized by the neutral winds, shown in blue arrows in the following Figure. 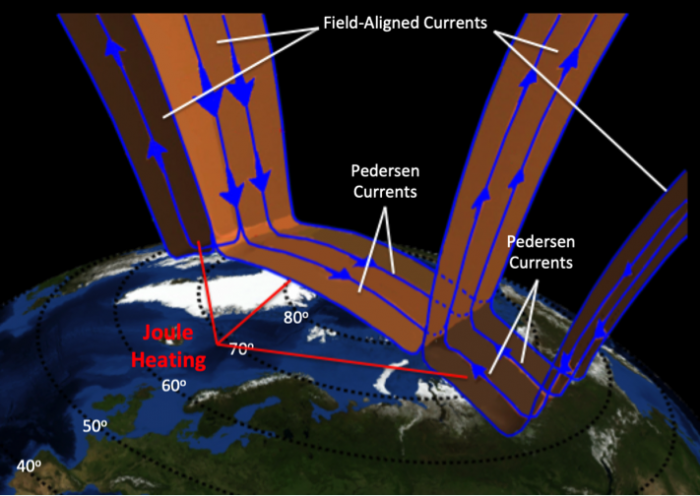 Joule heating is known to be one of the major energy sources of the upper atmosphere, however the exact quantification is a major unknown, and existing models as well as measurements based on remote sensing techniques differ by as much as 500% in estimates of the total Joule heating rates (Palmroth et al., 2005). Since Joule heating involves the differential motion of ions and neutrals, both ion drift and neutral wind measurements are required, together with measurements of electric and magnetic fields and conductivity, which in turn requires measurements of ion and neutral composition and temperatures. Furthermore, recent findings based on monitoring plasma drifts of ionized barium clouds that have been released from sounding rockets have shown that the small-scale contributions to Joule heating are greater than the mean field contribution by a factor of 2 to 3 or more, depending on solar driving and location (Hurd and Larsen, 2016), and that Joule heating estimates based on Incoherent Scatter Radar (ISR) or Coherent Scatter Radar (CSR) measurements could potentially greatly underestimate the actual amount of Joule heating, as they generally cannot resolve small-scale structure in the high-latitude ionosphere. Thus in-situ measurements of all the parameters required for obtaining Joule heating are needed, in order to assess on the sources of uncertainty between different methodologies.
• Energetic Particle Precipitation
• Thermosphere –ionosphere variability
• Geomagnetic field variations
• Variations in satellite drag
• Variations in ionospheric electron density
• NOx production
• Geomagnetically Induced Currents (GICs) primarily occur in high voltage/low resistance power lines. They are the result of geo-electric fields induced in the conducting surface of the Earth as a response to fluctuating ionospheric currents at altitudes around 120 km. The GIC impact at the Earth’s surface is subject to solar wind and geomagnetic activity control, as well as Pedersen and Hall conductivities. The geometry and location of these high-altitude current systems is fundamentally controlled by the morphology of the Earth’s own magnetic field. There are critical gaps in our current understanding of all of these linkages. Field aligned current (FAC) systems such as the large-scale Region 1 (R1) and Region 2 (R2) ‘Birkeland’ currents, and smaller scale cusp currents, polar cap currents and the substorm current wedge provide a complex coupling between the solar wind and the magnetosphere and ionosphere. The behaviour of field-aligned and ionospheric currents during geomagnetic storms is poorly studied due to limited data availability. Feedbacks exist between the currents, electric fields and conductivities which suggest that ionospheric currents have a complex (non-linear) response to different levels of geomagnetic activity forcing, while ionospheric conductivity is modified by enhanced precipitating electron flux due to extreme FAC, which then feeds back on the electric fields and currents. Other examples of possible feedbacks include enhanced outflow of ionospheric oxygen that may affect substorm occurrence and enhanced neutral winds that may provide a drag on ionospheric ions that might damp current variability. The complex response of the magnetospheric system to storm sudden commencements (SSC) includes strong dawn-dusk asymmetry of the large-scale Birkeland currents, fast motion of the current systems, and formation of additional current layers. There is evidence that the meso-scale (~100-1000km) structure of ionospheric currents is important in terms of rate of change of the horizontal component of the surface magnetic field, ∂H/∂t. These currents are therefore relevant to hazardous GIC, despite the diminution of the contribution to surface external H from ionospheric currents with spatial wavelengths less than a few hundred km, due to Biot-Savart integration. This is demonstrated by differences in the distribution of directions of intense ∂H/∂t with those of the corresponding horizontal magnetic field, H, and consistent with higher time frequency fluctuations being generally associated with higher spatial frequencies below the system scale. For example, a 100-1000km ionospheric eddy would be expected to have a 2-30 min overturning timescale for representative 500-1000 m/s convection speeds. This is important because present day Magnetosphere-Ionosphere models at best only reproduce behaviour on hour or more timescales and meso-scale structure is currently over-simplified in GIC models. Since GICs influence various infrastructures, at different locations, what is required is a more complete understanding of high-frequency, meso-scale current structures and the physics behind them. Since ionospheric currents are a convolution of the structure of electric field and Pedersen and Hall conductivities, there is a need to investigate the relative contributions to meso- and small-scale variability of these parameters. Using Daedalus, which can measure these quantities, we will be able to answer the following: is electric current variability dictated more by the variability of the electric field or the variability of the conductivity?; are variations in conductivity more or less important than variations in conductance (i.e., to what extent does electron density profile matter)?; and what is the relationship between electric field and conductivity?
• Uncertainty in orbit prediction
• Radio signal refraction and absorption
• Changes in Ozοne
• Transformer heating, voltage and AC harmonics fluctuations
• Large margins required in low Earth orbit space operations
• Navigation and communication signal degradation
• Impact on lower atmosphere
• Difficulties in management of and damage to power grid